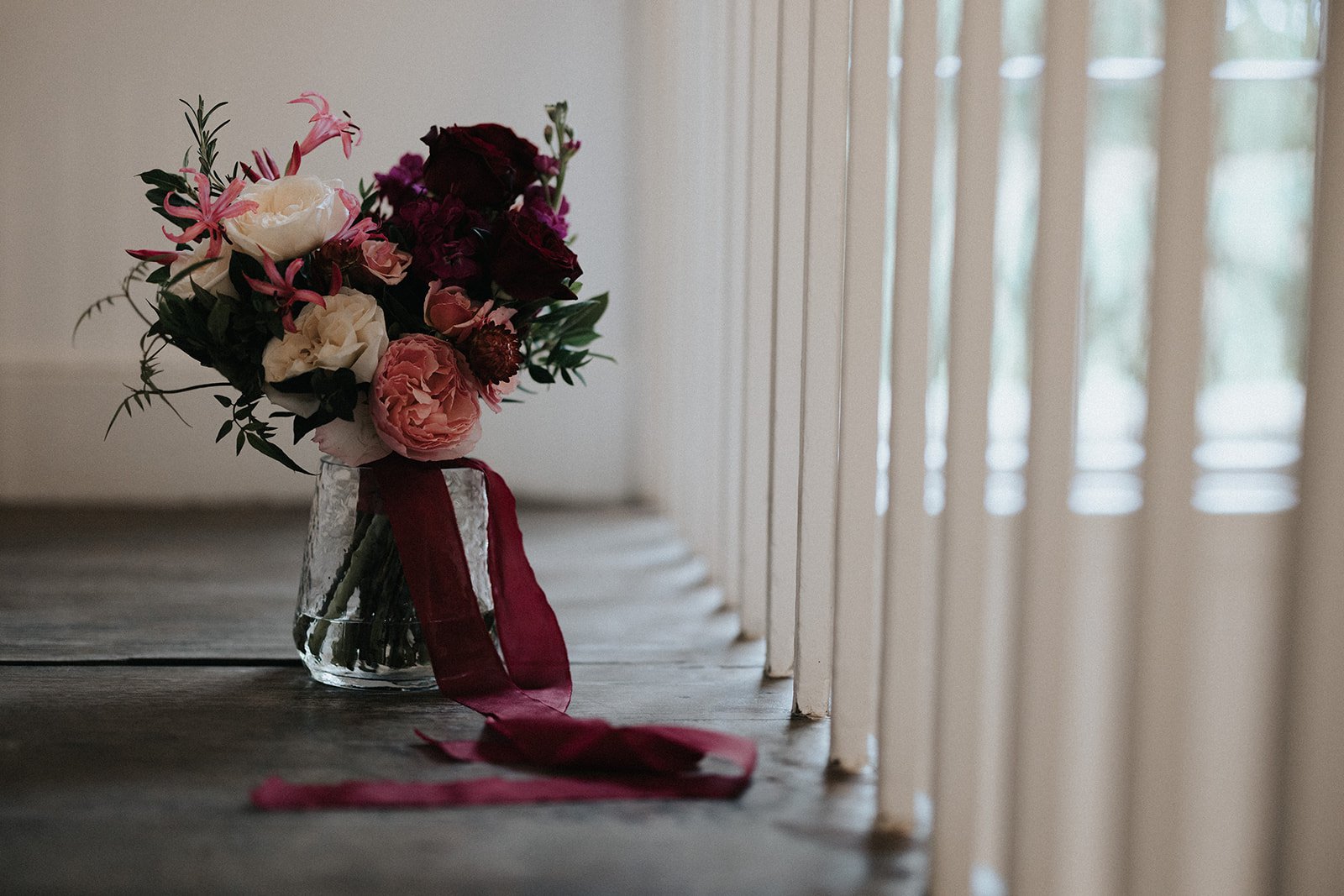 When I met E and J they were near the start of their wedding planning journey and hadn’t yet decided their colours. What they had decided on was a November wedding date, an incredible venue and a talented photographer. At this point I knew that whatever colours they chose it would be beautiful.

Over several cups of tea, we talked through everything they were looking for and I left feeling as if I had spent the afternoon chatting with friends rather than in a work meeting.

I think you can see which colours they decided on from the photos.

On a cold November day E and J were married at Aswarby Rectory, a venue that almost needs no introduction. The pared back country house aesthetic has been causing ripples through the wedding world since they opened.

The morning was filled with laughter from the hair and makeup preparations upstairs. Every so often a Bridesmaid would appear, leaning over the banister, to check on how the staircase flowers were progressing and commenting on the delicate scent of the roses.

By the time the Groom and his party arrived the flowers were finished, floors swept and, controversially, the buttonholes were left in the hands of the talented Matt Horan photographer. He told me he had plans for them and that he did. The photos are just perfect.

Read on for my top three memories and all about the flowers.

Marriage is about partnership and this couple exhibited this in abundance. When E was swamped at work, J did not hesitate to pick up the wedding planning reins – even on the flowers. Even though he didn’t know anything about flowers, he knew they were important to E and so we worked together to finalise the arrangements. Then finalise them again when Covid changed their plans.

This really was two people working as a team to create their life together in the way they wanted it. Their love and care was quiet and considered and clear to me as I am sure it is to everyone around them.

Scented roses were the only flower that E and J specified they must have. They had met me at a wedding fair where I had put together a bouquet full of garden style scented roses which they adored. After getting them to sniff all the roses and seeing if they could smell the difference they decided that scented flowers would be a big part of their day.

There is more on the flowers below, but the crucial part is that they described what was important to them and trusted me to deliver it to them. Yes, of course, they were interested in which flowers would be included, but they trusted me to use my judgement for what would look best (and be in budget) for their day.

In the same way they described the flower arrangements they felt were a must and others that were a ‘nice to’. This meant that I had a clear idea of how to meet their budget and where they were open to suggestions. For example, a whole flower rich staircase was out of the budget and often couples then suggest making something smaller with fewer flowers. I knew this would not create as much impact as focusing on a more lush green and flower rich arrangement for the bottom third of the stairs. E and J wanted maximum impact from their flowers so this change was easy for us to agree on.

I do adore a classic white or blush pink wedding and as a wedding florist I do quite a few of these. So, when a couple decides on a rich, velvety, warming colour palette for a November wedding this gets me very excited. It pushes me to be more creative, to think of flowers I might not usually use and how to blend these with other flowers to create the style the couple want.

E was clear from the start that whatever the flowers the backdrop would be a rich winter green to coordinate with the Bridesmaid dresses. The final palette was only confirmed a few weeks before their day when I pre-ordered the Fairtrade scented roses. The exact balance of red to pink, to peachy orange was just gorgeous. It perfectly matched their other details and the aesthetic of the venue creating a very coherent and styled feel.

All about the flowers

In addition to the scented garden roses, I chose scented stocks plus rosemary and mint foliage to create a unique perfumed bouquet. Stocks smell a little like cloves creating an earthy undertone balancing the sweet scent of the roses. These flowers were in all the arrangements and were the first thing to greet the guests as they entered the venue.

Eco-friendly locally grown flowers were important to E and J and this made the flower choices very challenging because there are very few flowers in November in England. A small portion of the arrangements were British grown and this was primarily the foliage. Almost all of the flowers were imported, choosing the next best option of Fairtrade where it was available. This was partly due to the season and partly due to local flower availability.

Both nerines and helichrysum are in season in November but I could not source them locally. This means that as locally grown flowers improve in availability (which they are year on year) it would be possible to create this look with a much higher percentage of locally grown flowers. It isn’t a complete answer to the eco-friendly debate, yet it is still a step in the right direction and shows what could be possible in the future.

Thank you E and J for choosing me to be your florist, I had the best time x.

All wedding photos courtesy of and copyright of the very talented https://www.matthoranphotography.com/

An outdoor black-tie wedding in autumn

How do you get the wedding flowers just right on the day?